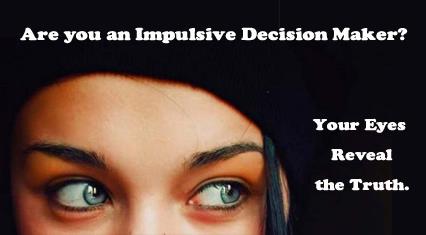 You’re at the railway station, waiting in a queue to buy a ticket. The other queue seems to be moving faster… Do you jump to the longer but seemingly faster queue or stay put?
You’re stranded with a flat tire. A stranger offers to give you a lift to work. Do you trust him and save yourself from an angry boss or do you rather get late and reach safe?

There are so many small impulsive decisions that we have to take in our daily life. How long do you take to make up your mind? Scientists at The John Hopkins University who studied 23 people may have an answer from the movement of your eyes, called saccades.

Saccades are eye movements which occur when we focus on different objects in succession. They are the fastest movements of our body, occurring in milliseconds. When we humans look at a scene, we do not look at it in a steadfast manner. Instead, our eyes make jerky movements to locate interesting parts of the scene. These serve to view a scene in small focused areas and thus help our brain ‘see’ more efficiently. Saccades are known to slow down as one ages and are the fastest in teenagers (who are coincidently also known for their impulsive and sometimes brash decisions).

For the study volunteers looked at successive dots on a screen. Their saccades as they looked from one dot to another were recorded using a camera. It was found that saccade speed is an attribute that remains constant for each person, but varies a lot among different people. In the next part of the test, buzzers and voice commands to look to the left / right were used to test the individuals’ decision making and impulsivity.

The test results reveal that people who make quick movements (or at least eye movements) are more likely to be impulsive in their decisions. This gives a better understanding of how our human brain evaluates time when we are making decisions. This also helps in understanding why people with brain injuries or illnesses like schizophrenia or depression have changes in impulsivity.

Toys to Develop your Kid’s Vision