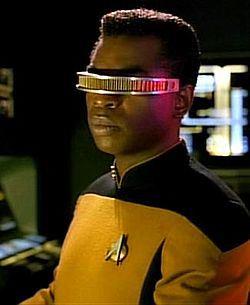 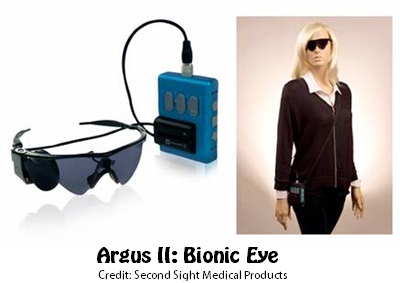 “Mom, what are those funny sunglasses?” five-year Arnav asked with a look of amusement. It was the first time Arnav had seen the blind Lieutenant Commander Geordi La Forge in the movie Star Trek. “Son that is a VISOR, a special device that helps him see despite his blindness.” Then why doesn’t the blind uncle in the PCO booth use it? “This is not real son, it’s just a movie...”

It’s very likely that Arnav’s mother will be proven wrong in a few years. We are soon getting closer and closer to the day when our universe resembles the star trek world.

The Argus II was the first bionic eye to receive approval for use in patients with Retinitis Pigmentosa.

Retinitis Pigmentosa is an inherited eye disease in which abnormalities in the retina lead to loss of vision. The patient notices a decrease in night vision, followed by difficulty in the peripheral vision and total blindness in most cases. Currently, the treatment for Retinitis Pigmentosa aims to halt the progress of the disease. There is no cure.

This is where the Bionic Eye, Argus II comes in the picture. Argus II will soon be offered to patients with late stage retinitis pigmentosa. This bionic eye works by capturing video images in a tiny camera located in the patient’s glasses. These video images are then converted into small electrical impulses and wirelessly transmitted into electrodes on the retina. These impulses stimulate the retina’s cells to perceive the light patterns and pass them on to the brain, thus helping the patient “see”. It requires the patients to get trained. Initially, the patient is mostly able to see light and dark spots. After a while, he learns to interpret what the brain is showing him.

Argus II Bionic Eye - The Argus II, which received FDA approval in February 2013, will soon be implanted as a treatment for Retinitis Pigmentosa in patients. 12 medical centers in the USA have been identified earlier this month where this bionic eye will be launched.

Until the Argus II is launched in India, patients looking for treatment for Retinitis Pigmentosa can make use of Low Vision Devices. If you have someone in your family who has Retinitis Pigmentosa or wish to rule it out, you can seek an appointment with a Retina specialist at Advanced Eye Hospital in Navi Mumbai.

We have received numerous queries on when Argus II will be launched in India and how much it would cost.

Unfortunately, we cannot yet comment on when the Bionic Eye would be launched in India. But for all the Indians who are eagerly awaiting more information for their loved ones, here are some details from around the world on the latest on Bionic Eye:

April 2014: Mr. Roger Pontz, who was one of the first people to receive the bionic eye implant, told media persons what it was to "see" with the implant. He narrated how he would run into walls earlier, but now he could at least see where his plate of food was on the table. His brain is still getting used to processing the images received from the device.

April 2014: To date, 86 people have received Argus II implants. 3 of these had to be removed after many years due to surgery complications. The longest period of time that anyone has used the implant is 7 years.

January 2014: Retina Specialists, Dr. Thiran Jayasundera and Dr. David Zacks at the University of Michigan Kellog Eye Centre in the USA implanted the first Bionic Eyes in the US when they operated on a patient with Retinitis Pigmentosa.

The patient is allowed to fully recover from the surgery and the retinal prosthesis is activated later. Then the patient undergoes training to help him adapt to the new vision. It is expected that the patient will be able to detect shapes of objects in front of them.

February 2013: The Argus II first received FDA approval for use in US Markets to treat late-stage Retinitis Pigmentosa.

January 2013: A study published in the British Journal of Ophthalmology found that many people with profound vision loss who were fitted with Argus II were consistently able to identify letters and words.

October 2011: The first ever commercial implant of the Argus II took place in Italy by Dr. Stanislao Rizzo of the University Hospital Ophthalmic Department.

May 2009: FDA granted approval for 20 Retinitis Pigmentosa patients to undergo clinical trials in the US. 12 participants were undergoing evaluation in similar trials in Europe and Mexico.

2002: The first human proof of concept was started with Argus I.

1991: The first experiments were done on a small group of 20 blind volunteers.

The idea for bionic eye came from hearing implants in the inner ear (called the cochlea) for those with hearing loss.

Memoirs of a Forgotten Swing