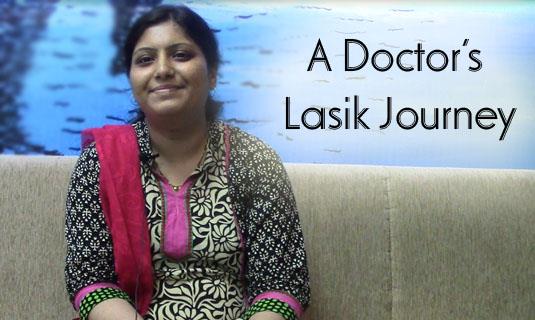 Dr. Poonam Jagtap is a resident of Ghansoli, near Koparkhairane in Navi Mumbai, India. She is a medical practitioner herself and works as an assistant medical director at Lions Hospital in Koparkhairane ,Navi Mumbai.

Dr. Poonam had been using spectacles since she was in the 9th standard, i.e. since the age of 12-13 years. She had myopia or near sightedness and needed to use glasses for distant vision. She was uncomfortable wearing spectacles while studying and she found it as an obstacle while performing daily chores.. She would have to take off her spectacles while reading books and would have to put it back while reading words from e the blackboard. That is the reason, she rarely wore her spectacles during her school life.

After her marriage, as a housewife, she had to spend a lot of time in the kitchen. Her spectacles would be quite bothersome. Especially, when the steam would cover her glasses with fog, leaving her blind for a minute! The same thing would happen whenever she would sit in an air-conditioned room or car. It would become tedious for her to remove spectacles again and again to wipe the fog.. Because of these reasons she opted to not wear spectacles altogether. In fact, many people didn’t even know that she had spectacle numbers.

Initially, Dr. Poonam was very hesitant to undergo Lasik surgery. But, after consulting with SMILE Lasik Surgeon Dr. Vandana Jain, she was convinced about the beauty of seeing a clear world without spectacles.

When she came back for the surgery, she was very scared and nervous about what will happen, how long will it take, etc. But, the whole scenario changed as she stepped in the OT for the surgery. She was no more nervous and did not feel like she had entered into a Lasik operation theatre at all.

At first, Lasik surgeon, Dr. Vandana Jain swabbed the eye region of Poonam’s face with antiseptics to prevent the chances of infection. Then anaesthetic eye drops were put into her eyes to avoid pain during surgery. While prepping up for the Smile Lasik Surgery, Dr. Poonam was very anxious about upcoming procedures. Smile Lasik Surgery Later, she was positioned under the Lasik surgery machine (the Visumax). A laser beam was then pointed onto her eyes and bam the surgery was done! It was a very short procedure indeed. Dr. Poonam had anticipated that it would take at least half an hour to one hour, but surgery was done in few minutes. She describes the entire experience of being under the laser machine as that of watching a 3D movie!

Now after undergoing Lasik, she feels that there is no burden on her eyes. When she had first been told to wear glasses, she had been very disappointed. But today, she is glad that she underwent Smile Lasik Surgery to correct her near sightedness.