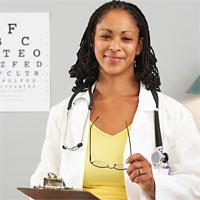 “What rubbish! It obviously sounds too good to be true.”, I sceptically told my neighbour, Mrs. Patil. I had become a sort of guardian angel to Mrs. Patil over the years. Every other day, she would excitedly come to me with some new offer or scheme and I would nonchalantly bring to her notice the loopholes that had fallen through the cracks. This time Mrs. Patil had come to me with a newspaper advertisement of an eye hospital. “For heaven’s sake!” I said, “How can you trust any Tom, Dick or Harry with your cataract?” And so, as usual, even though I had promised myself I would stop doing this, I found myself accompanying Mrs. Patil to this new eye hospital, she was going gaga about. I had wanted to get rid of my glasses since a long time, but I was sure that I would not be experimenting at a new place.

The next day I found myself stepping into the Advanced Eye Hospital for an appointment. I rolled my eyes as Mrs. Patil smiled back at the beaming receptionist. I was elbowed hastily by my friend when I suspiciously scrutinised the coffee that I was offered. Mrs. Patil was escorted for a basic eye check-up and I tried my best to find something that would prove her wrong. “Ask them if they would charge extra for this optometry work up” I whispered in her ears. “No?” I was not convinced as the optometrist shook his head in denial.

My friend was then called to the Cataract Specialist’s room, but I was becoming more and more uneasy as there was really nothing that I could point a finger at. “This can’t be true!”, I told myself as a voice inside my head began wondering if I could get a laser done for my own self. When this voice got louder and louder, I sought out the Surgical Counsellor at the hospital.

I had always thought that Lasik was all there was to laser vision correction. It was surprising to hear the Counsellor say that, ‘Lasik was not everybody’s cup of tea.’ This came as a breath of fresh air as I had expected them to aggressively sell their wares and get me to sign on the dotted line. I was surprised to learn that they not only had one laser machine, but three different types of them. Apart from an excimer laser machine, they also have something called Visumax, which is one of the latest technologies in the country. For the individuals whose outer layer of eyes is thin and for which the conventional laser machines cannot be used, there is a new technique called KXL. In this, the outer layer is initially strengthened so that it can be made fit for a laser treatment. The Advanced Eye Hospital is apparently the first hospital in the state of Maharashtra that has this machine.

By now, all my cynicism melted off. I was told that my friend had been advised to undergo a test and so I mentally rescheduled my day to accompany her to the test centre. I couldn’t believe my eyes when she came out of another room a few minutes later and told me that she was already done with her test in their testing centre! I had scoffed at the clichéd “A to Z eye care under one roof” tag line in their advertisement. But I had to eat my words when my friend was directed to the optical shop in their hospital where she could buy a revised pair of spectacles after her surgery.

As we left the premises, Mrs. Patil triumphantly looked at me and for once, I was at a pleasant loss of words!