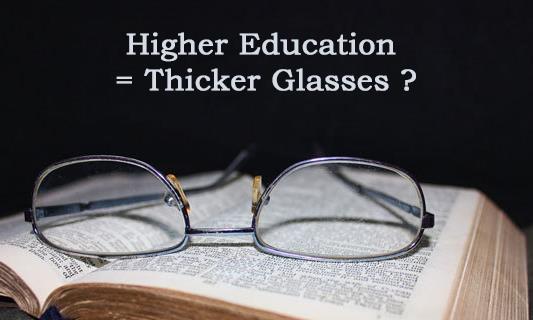 Glasses have always been associated with someone who always has his nose buried in his books. Now, a German study has found a proof that this social perception is a fact. The research was published in the June 2014 edition of Ophthalmology, the American Academy of Ophthalmology's Journal.

Near sightedness or Myopia is a common condition where one's eye fails to bend light accurately causing far off objects to appear blurry. The blame game between genes and environment - what was more responsible for near sightedness - has always been going on. Now for the first time, this population-based study appears to tilt the balance more in favour of one's environment.

There has been a huge spurt in the cases of near sightedness. Certain developed Asian countries have even reported increasing rates as high as 80%. Experts have pointed fingers at environmental factors like sedentary work life and reduced outdoor activity, for this alarming rise. Now, this research has found that the more educated you are, the higher chances you have of being near sighted.

Researchers at the University Medical Centre in Germany studied 4658 near sighted Germans whose age varies from 35 to 74 years. Those who had developed cataracts or had previously undergone Refractive Surgery to correct near sightedness were excluded. The study showed that as the education level increases, so does the percentage of people suffering from Myopia or Near Sightedness.

In addition to this, researchers also found that near sightedness increased with every additional year spent in school. The effect of 45 genetic markers was found to be much weaker than the level of one's education.

Severe myopia has been associated with higher chances of developing retinal detachment, macular degeneration, (Both problems are related with the photosensitive layer at the back of one's eye- the retina) premature cataracts (clouding of one's lens) and glaucoma (eye damage usually from high eye pressure).
So, what's the solution? Drop education to save your eyes? No, that is definitely not feasible in today's competitive world. The answer could be something as simple as encouraging students to spend more time outdoors.

You may Age, But your Eyes Need Not