Diabetes Is Closely Linked To Blurring Of Vision, Say Doctors 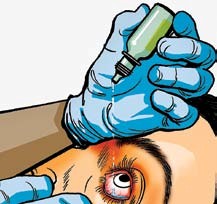 Sanpada-based Advanced Eye Hospital and Instuitute started an awareness programme on diabetic retinopathy and age-related macular degeneration (AMRD) with a free camp in the satellite city on Wednesday.

If detected at an early stage, the diseases can be prevented and blindness can be reversed. India is expected to hit the 100 million diabetic population mark by 2030. In last two years, diabetes related eye complications have nearly doubled in the country, doctors said, while addressing the media on Tuesday.

Diabetic retinopathy is caused when the blood vessels of the retina are degenerate. The retina converts images entering the eye into nerve signals, which are sent to the brain.  This happens when sugar levels are not under control and can lead to other problems like cataract, glaucoma, retinal edema or detachment or permanent blindness.

Some of the basic symptoms are blurred vision over a period of time, shadowy appearance, missing certain areas of vision and trouble seeing at night. Retinal photography or the fluorescein angiography test helps to detect this condition. Treatment options include laser treatment or surgery, which is prescribed by the ophthalmologist based on the individual’s condition.